I did everything I was supposed to.

I was the “good girl” growing up. The one who got straight A’s in high school and went on to get two degrees from two awesome (but expensive!) universities. I landed well-paying jobs, and my 6-figure salary quickly overshadowed my 6-figure student debt.

But I quickly felt like a slave to that salary.

Year after year I made good money, and had nothing to show for it but debt and bills. I was totally on the hamster wheel. You know, where you put all of your energy into moving forward, spinning and spinning, but you’re staying in the exact same place.

Did I really want to spend the majority of my life working this hard to not move forward?

That answer was a HUGE “no!”

I needed to go after something different because this “more money, higher promotion” plan was not taking me where I wanted to go.

But where did I want to go? What was my end goal? Answering that question changed my life.

Technically, a conversation with a coworker changed my life. A coworker who I know made more than I did but chose to live with his parents. That allowed him to knock out his $100,000 student loan debt and travel, travel, travel.

And not just travel. He could explore different career paths if he wanted (which is what he’s doing now), maybe even a role that paid a little less. He could prioritize his happiness, his family, or whatever he chose to, instead of being a slave to money.

He had what I wanted: Freedom

When I realized that more money and prestigious titles were not my end-goal, I was able to take charge of my life and shift it to a path that would lead to what I did want, freedom.

Well, my dreams started small. “I want to travel more, help family/friends without being set back, maybe buy our next car with cash.”

And then those dreams grew. “I want to invest like crazy so we can retire before 50.”

Okay, let me reel it in…(I get excited!)

There was one thing that stood in the way of those dreams, and that was my $180,000 student loan debt. I fortunately knew better with credit card and car debt, so that wasn’t an issue, but my student debt lingered.

So several “debt-free” and “early-retirement” success stories later, I was super inspired and laid out a plan to pay off my $180,000 student debt in just 3 years.

I started my aggressive payoff journey in January 2014 (with my super supportive husband by my side!), and as of July 2015 I owe $77,000. I am happy to say that because of a clear strategy and a strong budget to back it up, I am on track to being debt-free by December 2016!

I went public with my journey for the accountability (which is super important for lofty goals), and it was so well-received that I’m now coaching women across the nation, helping them get out of 6-figure student debt so they too can live a life of freedom.

I took and am still taking charge of my life by putting my money where my dreams are, and that has opened doors for me to do what I love, helping others break free financially.

P.S. If you want to follow my journey and get inspired to start your own, I invite you to join our community of Game-Changers here (I’ll even give you a freebie: my 5 Steps to Beat Student Debt Action Guide) 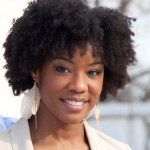 rea S. Branch is a Money Transformation Coach and Speaker helping women break free of student debt, so they can live a life of freedom, a life where they can afford their dreams. In 2014, she set her ultimate goal of paying off $180,000 of student debt in 3 years.Trea has taken the strong, foundational money principles that are helping her reach debt-freedom by 2017, and applied them to a 90-Day Beat Student Debt Private Coaching Program that helps her clients pay off their student loans sooner while building savings and learning the healthy money habits that will help them change the game. For more information, visit treastwocents.com

← Black Women Self-Recovery: Choosing Wellness is An Act of Resistance Black Woman Pay Equity: Tryin' to make a dollar out of 64 cents →

Ready to get your FREE guide?